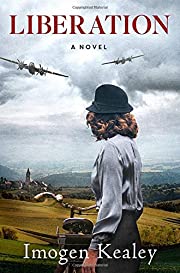 I thoroughly enjoyed Liberation, a joint venture between screenwriter Darby Kealy and novelist Imogen Robertson. Australian-born Nancy Wake, nickednamed “The White Mouse” by the Germans, is the subject of the novel. Major Bohm, a Gestapo agent, has captured Nancy’s husband Henri Fiocca. Henri is tortured assuming he will eventually give up information about his wife who joined Britain’s Special Operations Executive. Nancy quickly rose to the top of the organization training others to undermine the Nazis in France. The Gestapo wants her stopped. 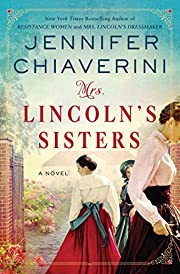 After the death of three of her sons and a decade after the assassination of her husband, Mary Todd Lincoln is declared legally insane and is committed to an asylum. After watching his mother’s erratic behavior, irresponsible spending and hoarding for years, Mary’s son Robert takes responsibility for pursuing this arrangement. In alternating chapters Mary’s sisters attempt to explain the family’s history and Mary’s behavior. Eventually Mary is invited to recover at Elizabeth Edwatds home in Springfield. (Elizabeth was one of Mary’s sisters.) Mary never recovers and is forever alienated from her son.

This is a treat for fans of historical fiction. It provides an interesting look into Mary Todd’s family, her unusual  interest in politics, the courtship and marriage of Mary and Abraham along with the triumphs and tragedies they faced. 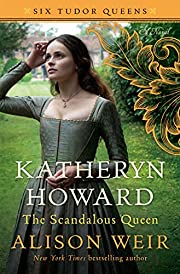 Manipulated by her uncle, the Duke of Norfolk, and her step-grandmother, the Dowager Duchess of Norfolk, 19-year-old Katheryn Howard deceived King Henry VIII  when the couple married. Katheryn assured Henry that she had no lovers before marriage which was untrue. Katheryn was unfaithful even after she married Henry. Katheryn loved the idea of being queen along with the beautiful jewels and clothing gifted her.  Katheryn does develop an affection for Henry, but her past soon catches up with her. Katheryn’s royal life implodes and she eventually pays the ultimate price.

A tale of passion, betrayal, murder, and intrigue well worth the time if the historical fiction readers time. 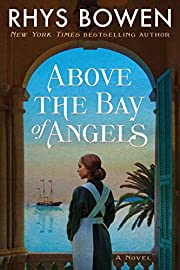 Above the Bay of Angels

(one of my favorite authors)

After her mother dies, 15-year-old Bella Waverly leaves school to become a servant to support her alcoholic father and younger sister. Bella witnesses the accidental death of  Helen Barton. She opens the envelope Helen was holding which is an invitation to apply as an under-cook at Buckingham Palace. Bella assumes Helen’s identity, interviews for the job, and is immediately hired. Willing to learn everything she can, Bella’s scones quickly become a favorite of Queen Victoria.

Bella is allowed to travel with the Queen’s entourage to Nice where her ability to speak French comes in handy. Many are in attendance when Princess Sophie’s fiance, Count Wilhelm, dies. It’s assumed he died from food poisoning. possibly from a mushroom Bella purchased from a local market. Bella works to figure out what really happened. 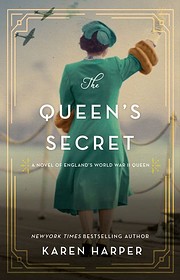 This novel is told from the perspective of the Queen Mother, Elizabeth Angela Marguerite Bowes-Lyon. The story leads the reader through bombings of London and into bomb shelters with the royals. Elizabeth kept her daughters away from London during this time. Hitler supposedly regarded Elizabeth as the most dangerous woman in Europe due in part to her unofficial political partnerships with her husband, King George VI, and Winston Churchill. They met weekly.

Elizabeth had little positive to say about Edward VIII  before or after he abdicated the throne in order to marry American divorcee Wallis Simpson. She was concerned Edward could cause problems for her husband with undue influence especially when George’s health began to fail. Elizabeth did not want Edward and his wife back in London.

Sadly the author, Karen Harper, passed away from cancer in April. She was the author of over 70 novels including romantic suspense, historical fiction, and mysteries. The Queen’s Secret, her last novel, was published in May. 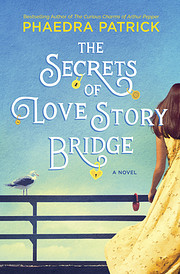 The Secrets of Love Story Bridge: a Novel

Widowed Mitchell Fisher, father of 9-year-old Poppy and former architect, works for the city maintenance department in Upchester, England. It has become a tradition and symbol of love to place a padlock, often engraved, on the city’s bridges. Part of Mitchell’s job is to remove them. While attaching a padlock, a young woman falls into the river.  Mitchell rescues her and she takes off. The notoriety following the rescue is intense and “hero” Mitchell is inundated with mail he feels compelled to read and respond to. The rescued woman turns out to be Yvette, a sister of Liza, Poppy’s music teacher. Yvette has been missing for over a year and Mitchell joins in the search to find her again.

A little romance and a little mystery make this a fun summer read! 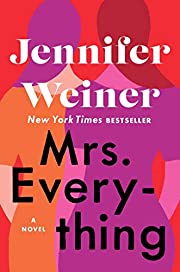 One of my co-workers heartily recommended Mrs. Everything to me, and I am glad that she did!

Growing up in Detroit in the 1950’s, sisters Jo and Bethie Kaufman have very little in common. Much to their mother’s chagrin Jo is not interested in clothes and boys like younger sister Bethie. Realizing the limitations of a long-term relationship with a woman, Jo ultimately marries and has a family. Bethie takes a long time to settle down after drugs, drinking and experiencing life at a commune but eventually marries and becomes a successful business woman. Over the decades Jo and Bethie fall in and out of touch but prove their devotion to each other when it counts most.

This is a multi-generational tale of a family in and out of crisis. There is much to learn about the importance of family in good and bad times. 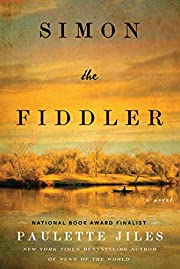 Simon the Fiddler by Paulette Jiles

After leaving a Confederate regimental band, Simon Boudin ends up in Galveston. A talented musician, Simon and a couple of other indigent veterans are able to make enough money to keep themselves fed and clothed.

When Simon and his fellow musicians are commissioned to play at a formal dinner of Union and Confederate officers, Simon see Doris Mary Dillon for the first time. Doris, an  indentured Irish girl, serves as governess to Colonel Webb’s daughter. Her life with the Colonel’s family is anything but pleasant. Simon is determined to buy land and  marry Doris if she’ll have him helping her to escape from the abusive Webb family as soon as possible.

This is a compelling story filled with violence and romance at the end of the Civil War. 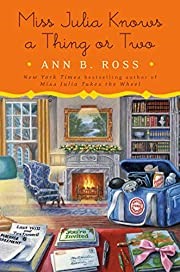 Miss Julia Knows a Thing or Two by Ann B. Ross

Miss Julia Knows a Thing or Two by Ann B. Ross is the 22nd entry in the Miss Julia series. I’ve been a big fan of this series for many years, so I always enjoy getting back into it!

Forever supportive Julia Murdoch wants to help her friend, Etta Mae, facing future unemployment by buying a home healthcare business and selling it to her at a bargain price. Miss Julia’s neighbor, Mildred Allen, is facing the reality that she can longer care for her husband Horace at home. In addition Mildred has an unknown 6-year-old adopted granddaughter who is dropped off for Mildred to take care of at Christmas. Of course Miss Julia is ready, willing, and able to assist whenever she can.

Looking for quick feel-good stories, consider giving this series a try. When it comes to friendship, Miss Julia definitely knows a thing or two!

Where the Light Enters: Building a Family, Discovering Myself  by Jill Biden (2019)

I’m not much for political memoirs. However, with Joe Biden as one of the major candidates for the 2020 presidential election, I thought it might be fun to read about the woman behind the man.

First Ladies tend to attract a lot of attention. From Abigail Adams and Dolley Madison to Hillary Clinton and Michelle Obama, each woman has navigated a tricky role that is unpaid and has no technical responsibilities but still has a staff, an office, and an enormous platform.

But what about the Second Lady?

If First Ladies tend to be lightning rods for commentary, Second Ladies are often able to avoid the spotlight—or, at least, the spotlight shines less brightly on them.

Such is the case with Dr. Jill Biden.

Dr. Jill Biden was a 23-year-old divorcee when she was set up on a blind date with then-Senator Joe Biden in 1975. Joe was in his early 30’s, just a few years into his Senate career. He was also a single, widowed father of two sons. Jill was en route to a career as an English teacher. It seemed like an odd setup, but the pair clicked very quickly.

In Where the Light Enters, Jill Biden (also known as “Dr. B.”) recounts how her relationship developed with her Senator spouse. She talks about navigating complex relationships with Biden’s two sons, Beau and Hunter, and her uneasy development as a political wife.

In her book, Dr. Biden largely remains apolitical. She spends the book sharing personal stories about the Biden family’s complicated and often tragic history. She talks about her role as stepmom, worrying about honoring Neilia, Joe’s first wife, especially with her stepsons. She recounts her husband’s 1988 brain aneurysms that nearly killed him after his first presidential run, and required months of recovery. She recounts struggling with worry as the stepmom of Beau, deployed service member. She also recounts the harrowing experience of losing Beau to brain cancer in 2014.

Dr. Biden also talks about her own career. She holds an EdD from the University of Delaware, and has spent much of her teaching career in community college systems. In 2009, upon her husband taking office as Vice President, she became the first Second Lady in American history to hold a paying job during her husband’s tenure. Because of her relatively low profile, Dr. Biden has been able to continue teaching with many of her students unaware that their professor routinely spent evenings at White House events.

Regardless of one’s political affiliation, there is much to admire and enjoy about Where the Light Enters. It’s a poignant look at the world of a woman who well may be our nation’s First Lady come January.

Read it or Weep
Blog at WordPress.com.