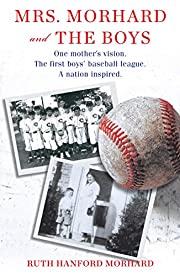 Mrs. Morhard and the Boys: One mother’s vision. The first boys’ baseball league. A nation inspired.

The Rocky River Public Library is pleased to invite you to an author talk via Zoom on Tuesday, September 22nd from 7:00-8:00. Ruth Hanford Morhard is the daughter-in-law of Josephine Morhard, the star of the story.

In the book the reader learns about Josephine’s life before she settles in Cleveland a single mother with two children, owning a butcher shop, and surviving the impact of the Great Depression,

Josephine, who was one of 17 children, had a hard life. Her father depended on her for much of the farm work in addition to helping with her siblings. At 12 she left home figuring she could support herself by living with another family taking care of children and doing housework.

Eventually Josephine married twice. Both husbands were alcoholics and abusive. After divorcing her second husband, Josephine was particularly worried about her son, Junior (Albert). He needed positive male role models and something to occupy his time.

You will know and understand the “rest of the story”, as radio personality Paul Harvey would say, by joining the presentation on September 22nd. Hope to see you there!