I feel like it was a million years ago that I read and loved The Alienist by Caleb Carr. Published in 1994 (so, not a million years, per se), this novel was the first in Carr’s dark historical fiction series featuring Dr. Laszlo Kreizler as an ahead-of-his-time psychologist whose ability to profile criminals helps track down serial killers. Kreizler is assisted by Times reporter and friend of Teddy Roosevelt, John Schuyler Moore, and society woman-turned-trailblazing policewoman Sara Howard. This team is not afraid of gritty scenes and certainly finds them in 1890s New York City when a string of street children are gruesomely murdered. In this novel and its two sequels, Carr’s magic is his character development and slow building suspense. 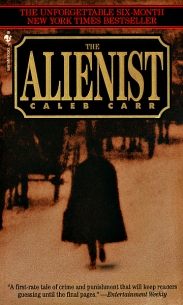 In 2018, I was thrilled when “The Alienist” was was released as a TNT television series, starring Daniel Brühl, Luke Evans, and Dakota Fanning. For me, it checked all the boxes for good murder mystery viewing: lush period setting, beautiful fashion, brooding intensity, and fine acting.

I’m even more excited that the second season, “The Alienist: The Angel of Darkness,” debuted last night! After watching the two hour premiere, not only am I a little extra sleepy today, I am already looking forward to next week’s episode to see what will befall my favorite characters.

If you are ready to dive in, just know that both the TV series and books are dark and violent–you can’t have a criminal profiler if there isn’t a criminal, right? Disclaimers aside, find sometime for a book that will stay with you throughout the years and pick up Caleb Carr’s 1995 Anthony Award for Best First Novel, The Alienist, or set your DVR.