The Mercies by Kiran Millwood Hargrave takes places on Vardo, a remote island in Norway, in 1617. In a scenario based on historical fact, a terrible storm drowns most of the men from the tiny settlement on Vardo while they are out fishing. The women are left to provide and protect themselves. They are also left seeking answers: why did the storm come and take their men? And what do they do now?

Eighteen months later, Commissioner Absalom Cornet and his new wife Ursula come to Vardo. Ursula grew up in Bergen, Norway, surrounded by servants; she has no experience cooking, baking or cleaning, all of which are expected of women. Luckily, local woman Maren offers to help Ursula adjust to her new life. The women become fast friends.

The Vardo community has been left reeling from the storm, and is trying to adjust to their new normal. As commissioner, Absalom has been sent to take control of the situation, and to rid the community of supposed witchcraft. As suspicion mounts, Maren’s sister-in-law Diinna is suspected, as are others in the community. With the community turning to accusation and her husband seeking answers, Ursula is left to watch the chaos unfold.

The Mercies is a challenging read, that focuses on superstition, brutality, and the subjugation of women. For the willing audience, though, it is a fascinating journey back to seventeenth century Norway.

It is also interesting to explore the true history behind this book. In 2011, a monument was erected on Vardo in memory of the victims of this episode. 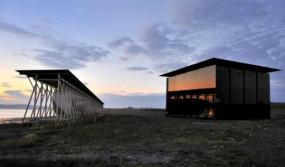